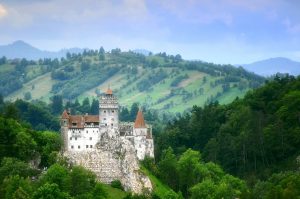 Famous houses abound in literature. Did your favorite literary house make the list?

Manderey from Rebecca by Daphne du Maurier (1938). One of the most famous lines in literature, “Last night I dreamt I went to Manderley again," begins this classic novel of romantic suspense, a creepy maid and a dead wife, based loosely on Jane Eyre.

Thornfield Hall from Jane Eyre by Charlotte Bronte (1847). Jane, a governess to the ward of Mr. Rochester, goes to Thornfield Hall, which is described as "a fine old hall, rather neglected of late years perhaps, but still it is a respectable place." Rather like Rochester wishes himself to be?

Castle Dracula from Dracula by Bram Stoker (1897). The castle is described as "on the very edge of a terrible precipice....[and]...doors, doors, doors everywhere, and all locked and bolted." Sounds more like a prison.

Green Gables from Anne of Green Gables by L.M. Montgomery (1908). Anne is enchanted by Green Gables, her first real home, and christens the cherry tree outside her bedroom window as The Snow Queen.

Wuthering Heights and Thrushcross Grange from Wuthering Heights by Emily Bronte (1847). Two opposing houses on isolated, desolate moors reflect the contrast of wildness and gentility, and the importance of land ownership, in this famous novel of star-crossed lovers.

Satis House from Great Expectations by Charles Dickens (1843). A bleak, decaying home where all the clocks are stopped at twenty to nine as a shrine to a wedding that never happened.

Jay Gatsby's mansion from The Great Gatsby by F. Scott Fitzgerald (1925). Opulent, extravagant and an experience to party there. But the pool? Bad luck.

We welcome your respectful and on-topic comments and questions in this limited public forum. To find out more, please see Appropriate Use When Posting Content. Community-contributed content represents the views of the user, not those of Pemberley District Library